President Nana Addo Dankwa Akufo-Addo, on Wednesday 5th August 2020, commissioned an office complex at New Senchi Kortorpei in the Asuogyaman District of the Eastern Region, with a call on the management of the BRC to exhibit high maintenance culture.

The centre was established under the Rural Enterprises Programme of the Ministry of Trade and Industry, with funding from the African Development Bank (AfDB) and International Fund for Agricultural Development Fund (IFAD). 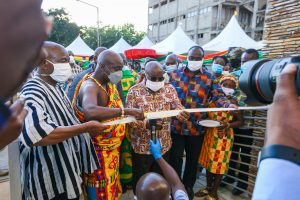 Addressing a durbar of chief and people of the Akwamu area, President Akufo-Addo noted that the objective of establishing the BRC was to provide a one-stop enterprise support centre to deliver a broad range of business development services (BDS) to potential and existing entrepreneurs and enterprises. He explained that the BRC will also operate as financial and investment facilitation hub and business information repositories for Micro, Small and Medium Enterprises (MSMEs). President Akufo-Addo urged the people in and around the district to make optimal use of the facility and consult the experts recruited to the BRC for support to start and grow their businesses.

He noted that the economies of advanced countries are resilient because of the formulation and implementation of deliberate policies geared towards supporting small, medium and large-scale industries.
“….Let us, therefore, as a country pay much attention to the private sector which is equally an engine of growth of the economy,” the President added.

He expressed optimism that the BRC would go a long way to strengthen private industries due to level of expertise and logistics within the centre and expressed gratitude to the people of the Akwamu Traditional Area who willingly offered the land for the facility. 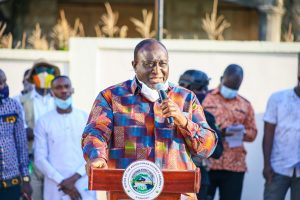 He also advised faith-based organisations, individuals and other business ventures not to hesitate in accessing business advisory services from the centre to ensure the sustainability and development of their businesses. Mr Kyerematen said the BRC would serve four municipal and district assemblies, which were the Asuogyaman District Assembly, the Upper Manya Krobo District Assembly, Lower Manya Krobo Municipal Assembly and Yilo Krobo Municipal Assembly. 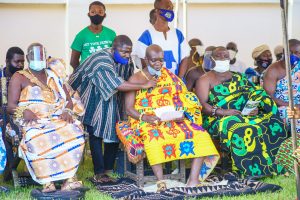