Richmond Yankson lost his only source of livelihood when he sacked as a casual worker at the Gomoa Central District Assembly. But luckily for him a training in beadwork funded by REP had been planned. He decided that instead of idling at home, he would rather go and take part in the training.

Little did he know that that was going to rescue him from the state of hopelessness he found himself after losing his job. Today, he makes a living for himself and his single child from using beads to produce necklace, slippers, bags and many other products, a business traditionally reserved for females. 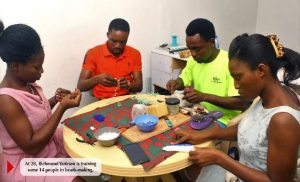 “If it had not been the first training I attended, perhaps, I might still be at home doing nothing. Now by the grace of God, I’m also training some people [14] to learn beads-making,” he says.

At age 29, Richmond may be very young but youthfulness does not limit his vision, as he hopes to train more apprentices in and outside the district in the future and also to ensure that his products will make a strong impact on the national and international markets.

Richmond expresses profound gratitude to REP, saying, “If it had not been them, I wouldn’t have been where I am today.”